In those last few months, there seems to have been a few pieces of news at conventions, about Hasbro making a brand-new preschool cartoon called Hana Züki Full of Treasures. At the current moment, only a poster for it has been published, with the promise of a Spring 2017 American release through an unstated channel or service.

However, the story of Hana Züki begins many years ago, in 2005, as a long history about brands, copyrights and acquisitions, are about to unfold before our eyes…

(Note 1: WordPress seemingly does not allow combining diacritics, so it pains me illogically much that I am unable to write the title as it should be, with umlauts over both the N and the U.)

(Note 2: The article will probably continue to be updated in the hours following its original upload.)

The very first trace of Hanazuki is a copyright from 2006 claimed by The Hanazuki Company B.V., registered in Amsterdam, Netherlands, a company that in turn was created by Hanneke Metslaar and Niko Stumpo in 2005. The first trace of their website that still exists out there, was capped from the 1st of July 2006. At this point in time, they are a Dutch company that runs both a creative studio and a boutique that produces trendy-looking objects. They’re also fond of Pac-Man sound effects, as it appears.

The About Us page from that time, states that it was created by Hanneke Metselaar and Niko Stumpo, who quit their jobs in order to create a boutique “where creative minds can meet and share their visions and works”. They worked on creating videos for a number of brands around this timeslot, with a list in November 2006 crediting them for making videos for EA Games, MTV Italy, Heineken, and GoreTex.

The website remains in this basic form for a while, but after August 2007 the site becomes broken as far as the Internet Archive is concerned. When the site returned to an archivable state in July 2008, the website has been revamped considerably, but is still owned by the same Dutch company, now describing themselves as a Multimedia Creative Studio. While they have now also had Reebok and Nickelodeon as video customers, they notably mention that they were now also dealing with toy designs. The first two traces of what would later become Full of Treasures could also be seen here.

The site remains like this until February 2011 at latest, when it instead says that the site is “undergoing a period of transformation”. The Vimeo music video by Datach’i that they provided as a sort of half-time entertainment for its website, seems to have been taken down in the years since then, unfortunately.

The period of transformation would go on to last for months on end, before changing on the 25th of September 2011 at latest, to another one-pager with little content. This change would however go on to show that something of great importance must’ve been going on in the background, when all the previous information is considered.

The earlier Hanazuki imageries above had caught the eyes of Hasbro, who were always on the look-out for new brands to develop, both inside of and outside the company. As it later turned out, Hasbro decided to buy the brand outright in 2010, while still involving its two creators Hanneke and Niko in it.

The Hanazuki Company B.V. changed its name to This Is A Robot in 2011, becoming a bit more low-key in what they were making, with workshops and The Yoshinami Game taking prominence among the things that they have made after the company changed its name.

Hanazuki still uses the same fonts for its logo after the transfer, so this does not appear to me to have been some sort of hostile takeover situation.

At this point at latest, Hanneke, Niko, and probably also Hasbro, have designed an extended purpose for Hanazuki. It was as a planned “interactive game” about dreams, overcoming nightmares, creativity and exploration, and was targeted to children aged 7 to 12 (but with girls receiving a special mention). The plot summary, as summarised by Holly Pavlika some months later after attending a blogger event about it, was to decorate:

(…) a little dreamer, which flies through the dreamscape collecting treasures. Once enough treasures are collected Little Dreamer presents them to Moonflower Hanazuki who brings colors and magic to a night.

After this point, things begin to happen within days of this. A trademark for Hana Zuki Full Of Treasures was filed on the 29th of September 2011, by HZKI Holdings LLC, who were established in Wilmington, Delaware. It was given a trademark serial number, but is currently listed as having been abandoned, at latest on 11th of January 2016.

After this point, things seems to have been going a bit hopskotch with the website and their plans. The website finally returned to an operable state on the 20th of October at latest. While Wayback Machine can’t render that cap very well, the 7th of November 2011 cap confirms at the very least that it’s a Flash-based site at this point, at least.

Progress on the website goes slowly and gradually after this. The copyright is now stated as @2012 HZKI Holdings, LLC.

A cap from the 5th of February 2012 has the bottom rows of logos be viewable and clickable, at least.

Indeed they seem to have run a Tumblr at some point. They posted content for exactly two months as it appears, in March and April 2014 (The cap is from 2nd of May 2015). There were ducks and clouds everywhere there.

It is very unfortunate that the “The Story” page never became archivable, since it lists such factors as “Little Dreamer”, “Hanazuki”, “Hemkas”, “Nightmares”, and “Treasures”; but lists absolutely no details about any of those. Some of those could perfectly well become factors in the upcoming Hasbro cartoon, even.

They had much more luck than before with a later set of trademarks established on the 29th of October 2012, at least as far as IP Australia (seconded through Trademarkalertz) is concerned, with all trademarks in question protected through 2022.

Looking through the trademark list, there is a lot of focus on dreaming and treasures there.

At this point, they also made a 30-second teaser for their brand. While the Vimeo video below is a re-upload, the earliest registered YouTube rip of it that I know of, is listed as being uploaded the 26th of November 2012.

The characters look very different than they do on the Hasbro poster (More about that further below). There are now several flying guys, and most of the characters have extreme obsessions with candy. Additionally, there were a lot more small creatures there than just the rabbits.

Despite being listed as a teaser, it appears to me to have been created for an old website, as opposed to trying to advertise about a full cartoon show.

The teaser is listed on TensionStudios as having been created by them, and in particular by Cristiano Nicolini and Josep Manen. I give credit whenever credit is both due and appropriate.

It seems that Hasbro took note of Hana Zuki Full Of Treasures already by 2012, as the blogger event mentioned much further above, was co-hosted by Hasbro and Hanazuki at an outlet of the Dylan’s Candy Bar store chain. The event also had a large focus on craftsmanship, and promised that the interactive game would be launched in the autumn of 2014.

Around this time they were doing a number of events at conventions, including two at Comic-Con Mayhem(?), and even one at South By Southwest on the 10th of March 2013.

And so the next few years goes by. Very little seems to be changing over the next few years, as a period of peace, perhaps a bit too much peace given the seeming lack of serious activity, descends on the land.

They added a YouTube video on or before the 7th of October 2013, that has later been taken down.

The interactive game also appears to have missed the launch date mark, likely to never having been heard from again.

This peace, which was not what all franchise makers should strive for, lasted all the way until the 21st of September 2015.

By the 10th of January 2016, Hasbro has acquired the URL of www.hanazuki.com. The abovementioned Tumblr deletes all its content, and the life and times of HZKI Holdings, LLC after this point is unclear to me.

The home page, now a subpage in Hasbro’s websites, consists at the current time of a pretty large poster demonstrating the setting of what has now become an upcoming preschool cartoon, Hana Züki Full Of Treasures.

Having at the same time both kept the basic spirit and yet made it feel like something different, the cartoon is scheduled for a Spring 2017 release. The CGI and the colour schemes have been brushed up considerably. The living cakes have been replaced, by emotional rabbits who use a model similar to the Seven Dwarves or Inside Out. Everything seems more explorable, while Little Dreamer now has a helmet, not to mention also having an air hose connected to his butt for whatever reason. The boy now also has a duckie plushie, for what I can only assume must be for extra dreaming comfort.

The planet has also become considerably bigger, judging by the size and curve of the horizon, Moonflower Hanazuki has become star-beamingly happy at first sight (and doesn’t seem to be doing any painting jobs so far), and there are now buildings and roads there too. It’s also a point to note that Meghan McCarthy is involved in this, it seems…

The synopsis is as of yet untold, but through finding and reading all this old information, I can imagine that dreams will be a very big part of it.

Its appearance at the San Diego Comic-Con 2016 was something of a small breakthrough as it slowly began its campaign to make sure that Hasbro fans, and to a smaller degree cartoon fans, have at least heard of it. (The SDCC stand below was painted by Italian cover artist Nicoletta Baldari, noted for her work on Melowy and the IDW Strawberry Shortcake comics, while the picture was taken by @Chevistian1 on Twitter.)

This shows a few extra details compared to only using the website poster. Moonflower now has shades of blue in her hair, which to me signals that they’re taking scenery shading seriously, or at least to the degree one could do so in a highly stylized HTML5(?) animated cartoon. The bunnies are outspoken in their postures, making it feasible that they are in fact talking characters, and there are more than a few animals and living sceneries around her. 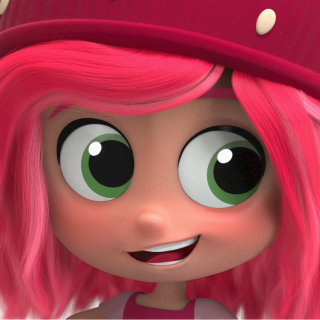